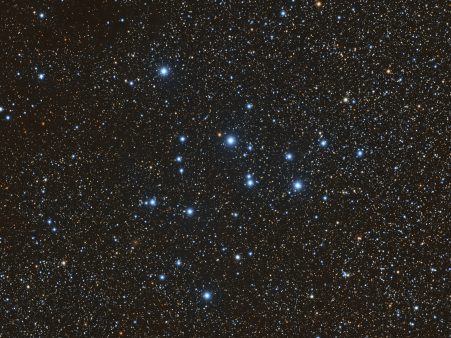 M39 is a very loose naked eye open cluster of at least 30 young stars, located in a dense portion of the Milky Way in Cygnus. The cluster is positioned in a beautiful rich region of the sky, with many other open clusters, thousands of stars, regions of dark nebulae, wispy emission and reflection nebulae visible nearby.The discovery of M39 is an interesting story. It’s often credited as one of Charles Messier’s original discoveries, which he made on October 24, 1764. However, the discovery has also been credited to French astronomer Guillaume Le Gentil in 1750 and even suggested that Aristotle observed it as far back as 325 BC.The cluster is relatively easy to find. It’s located in the northeastern part of Cygnus, not far from the constellation’s brightest star, Deneb (α Cyg – mag. +1.25). This blue-white luminous supergiant forms the faintest corner of the well-known and much observed “Summer Triangle”. The other two stars that make up the triangle are Vega (α Lyr – mag. +0.03) and Altair (α Aqr – mag. +0.77). Once you have located Deneb, move approx. 4.5 degrees east-southeast to ξ Cyg (mag. +3.72) and then hop another 5.5 degrees northeast to ρ Cyg (mag. +3.98). Positioned 3 degrees directly north of this star is M39. The cluster is best seen from northern latitudes during July, August and September.