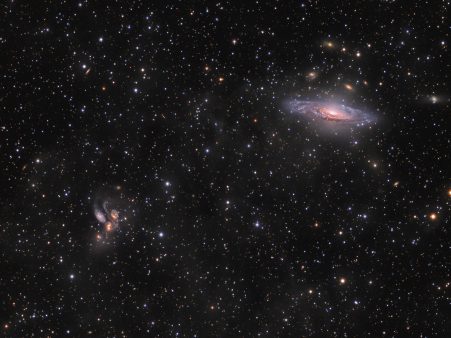 The large galaxy which can be found in the upper part of this photo is NGC 7331, which was discovered by William Herschel in 1784, and was among the earliest recognized spiral galaxies. Around NGC 7331 contains several companions and background galaxies which can be found in this photo. Its distance is given with about 49 million light-years. The spiral arms of NGC 7331 span around 100,000 light-years, just like our Milky Way galaxy. Indeed, our Milky Way galaxy would look much like NGC 7331 if seen at this distance and angle. So far, one supernova has been discovered in NGC 7331. Near the lower right edge, a grouping called Stephan’s Quintet is located. It consists of five galaxies: NGC 7317, NGC 7318a, NGC 7318b, NGC 7319 and NGC 7320. Four of these galaxies (all except for the brightest one, NGC 7320) form a so-called compact galaxy group. Indeed, this was the first compact group ever discovered, and is probably also the best studied compact group. These galaxies are undergoing violent collisions. Stephan’s Quintet was discovered by the French astronomer E. M. Stephan in 1877.