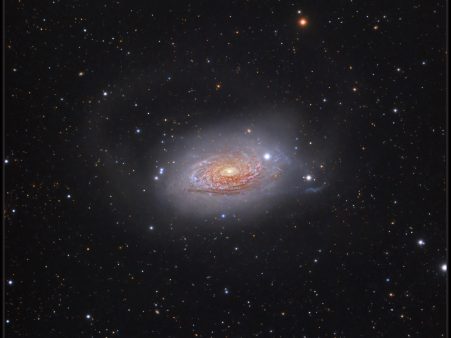 M63, also known as the Sunflower Galaxy, is a beautiful and spectacular spiral galaxy in the constellation of Canes Venatici. Along with M51, M94 and M106, it’s one of four Messier galaxies located in the constellation. Of these, M51 or the Whirlpool Galaxy, is a much-studied interacting grand design spiral that claims the title of finest galaxy in Canes Venatici. However, M63 is only marginally fainter and not far behind its more illustrious neighbour. In addition, M63 and M51 are gravitationally bound and along with at least 6 other smaller galaxies they form the M51 Group of galaxies.  M63 is best seen from the Northern Hemisphere during the months of March, April or May.