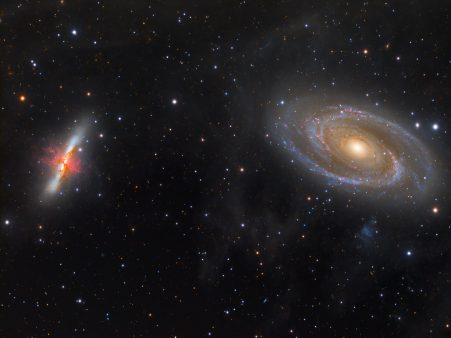 Messier 81 (also known as NGC 3031 or Bode’s Galaxy) is a spiral galaxy about 12 million light-years away, in the constellation Ursa Major. Messier 81 was first discovered by Johann Elert Bode. Consequently, the galaxy is sometimes referred to as “Bode’s . M82 (also known as NGC 3034, Cigar Galaxy) approximately 12 million light-years away in the constellation Ursa Major. M82 was first discovered by Johann Elert Bode on December 31, 1774. The two galaxies in this image appear wrapped in a gauzy network of nebulosity. This is the integrated flux nebula (IFN), it is an extremely faint glow caused by the combined light of the stars of the Milky Way reflected and re-emitted by interstellar gas and dust. It’s most easily seen in images far from the starry plane of the Milky Way. The IFN consists of blue starlight scattered by interstellar dust, as well as red light emitted by interstellar atoms and molecules. The IFN is so elusive it was not identified until the early 1990s.