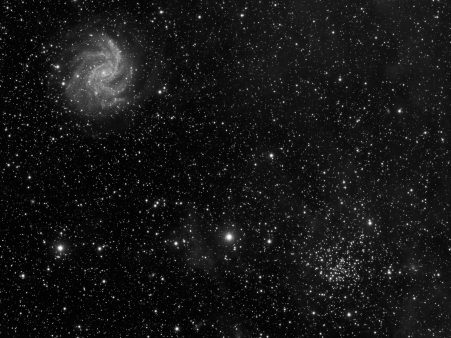 NGC 6946 (also tentatively known as the Fireworks Galaxy) is an intermediate spiral galaxy about 22 million light-years away, in the constellations Cepheus and Cygnus. In the Catalogue of Named Galaxies, it is called ‘Pyrobolus Cygni’, or the “Fireworks Galaxy”, because of the record number of supernovae discovered in it. It was discovered by William Herschel on 9 September 1798. NGC 6946 is highly obscured by interstellar matter of the Milky Way galaxy, as it is quite close to the galactic plane.  In the second corner is visible Open Cluster NGC 6939.